I’m on a bit of a spice kick, at the moment. My pestle and mortar, which to be honest I’m a little scared of because I’m convinced that one day I will drop it whilst washing it or something and it will break my foot, as it’s a massively heavy, great big stone thing but (touch wood), I’ve had it ohh, maybe about 15 years now, maybe touching 20 and I’ve yet to break anything with it yet. Anyway, I go through phases where my pestle and mortar will literally gather dust and then phases were I seem to constantly be risking life and limb because I’m always using it and then washing it, anyway, it’s one of those phases.

Today it was bashing up cumin, fenugreek, nigella seeds, mustard seeds and fennel seeds, which apparently is Indian Five Spice. It was a recipe from Nadiya’s British Food Adventure (Indian Five-Spice Vegetable Stir-Fry). Basically just a stir fry with the garlic and spices cooked separately before being added to the stir fry at the end. And it was okay, I really liked the five spice combination, I’m not a massive curry fan but the combination reminded me of the curries that I do like. The stir fry was just stir fry really but it was good to eat it with Indian flavours rather than the normal oriental flavours. It did defeat my kitchen a bit though, I have a tiny kitchen at the best of times and I’ve been busy this week, so it’s not exactly tidy and with all that chopping, spice bashing, two frying pans and a saucepan for the noodles, it defeated my kitchen capacity a bit. I managed it but it’s wrecked my kitchen even more and I’m writing this knowing I have to go in there and sort it out and not wanting to.

I think I possibly will make this again, well a version of it anyway. I’d like to repeat the spice combo and well, stir fries are always good. I won’t be making it for Z again though, he’s at the raw vegetables are okay, don’t cook them stage of fussy-ness (I always think though that stir frying is a great entryway into moving from just raw veg to cooked because it keeps more of the flavour and texture). S ate it though. Next time though, the kitchen will be tidier and I hope I’m not as time pressured. Now to go clean that pestle and mortar. 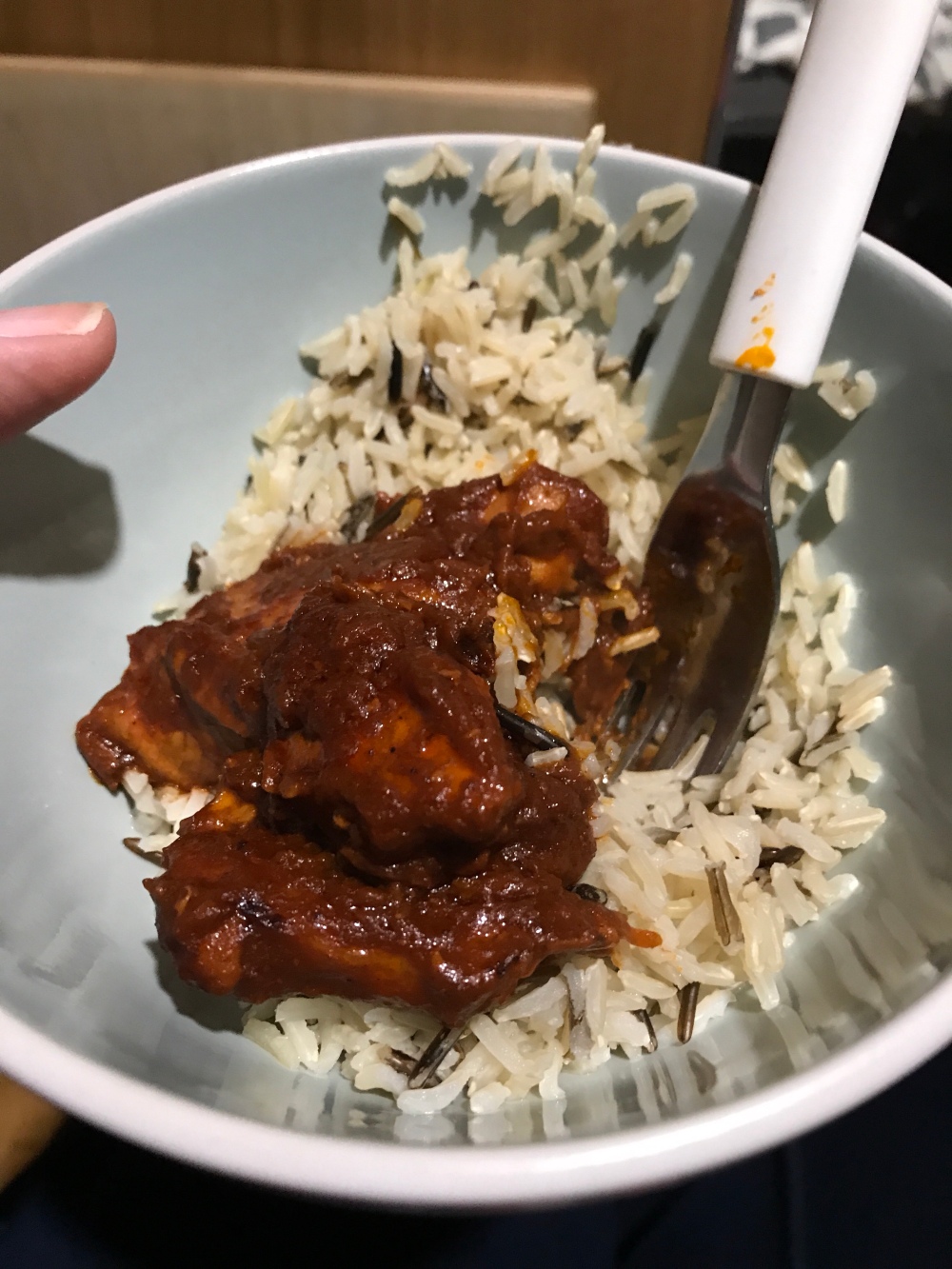 This is Easy Chicken Tikka Masala, also from Nadiya’s British Food Adventure. It’s not exactly quick to make but it is easy and the result is pretty nice. I hate cooking with meat though!!! But as I can’t eat a major vegetarian/vegan protein source (pulses) at the moment, come at me chicken. (I’m also intolerant to Quorn, before anyone suggests that) 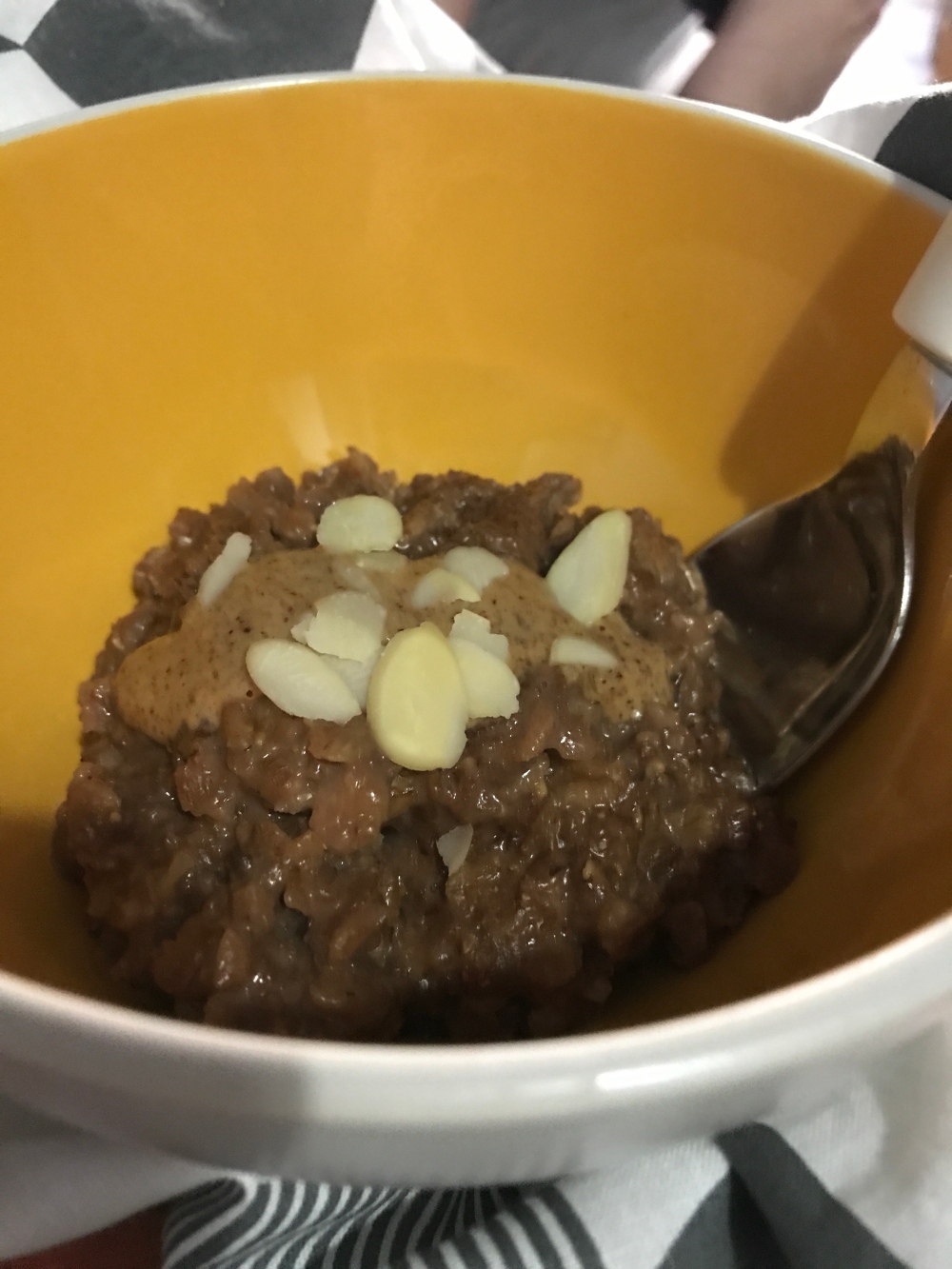 I am a toast and coffee girl in the mornings, recently I’ve been trying to make it toast, coffee and juice but even that extra step can be an effort sometimes. But it’s half term and I didn’t have to make breakfast until slightly later, so I was a bit more sentient.

This is Chocolate Rye Porridge from Anna Jones’ The Modern Cook’s Year, it’s also meant to have honey pears but I didn’t have any, I can imagine they would have been nice though.

As for the actual porridge, rye porridge takes a little bit of getting used to, with the first few spoonfuls, it has a bit of a different texture to normal porridge (there is rolled oats in the recipe too, it’s a 50:50 combination) but, although you can’t beat a good bowl of normal porridge, I think I could happily have rye porridge more often, particularly as rye is so good for you.

As for the chocolate part, thanks to it being just cacao powder (which is also good for you), I could get a soy free chocolate fix, yay! It also wasn’t overly chocolate-y, I’ve had chocolate porridges before and felt like I needed to lay down for a very long time afterwards because they were too rich.

Although I didn’t have pears, I still had the other two toppings from the recipe, almond butter and almonds, which were nice too!

This is Carbonara Cake from Jamie Oliver’s Christmas Cookbook, you can also find the recipe online but I’m not going to link to it because it wasn’t very nice. It bears an extremely loose resemblance to carbonara and was bland, overly fatty, too heavy on the eggs and very stodgy, sorry Jamie. 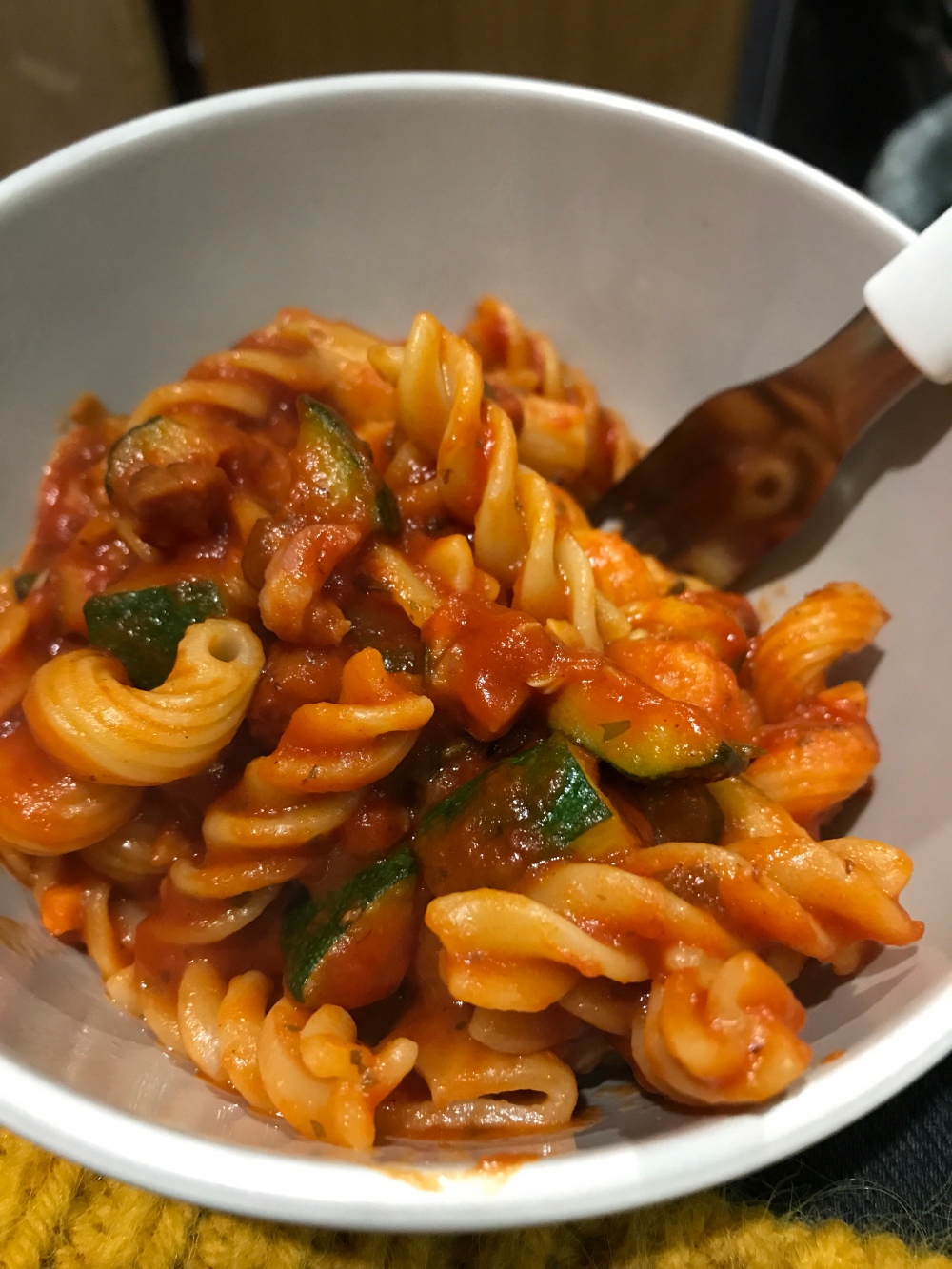 This is ‘whatever the Italian is for using up the last little bits in your pasta packets con zucchine e pancetta’ (basically the Conchiglie Con Zucchine E Pancetta, but I didn’t have any shell pasta) from Gino’s Pasta and it was nice (I used passata instead of tinned tomatoes because that’s also only what I had). 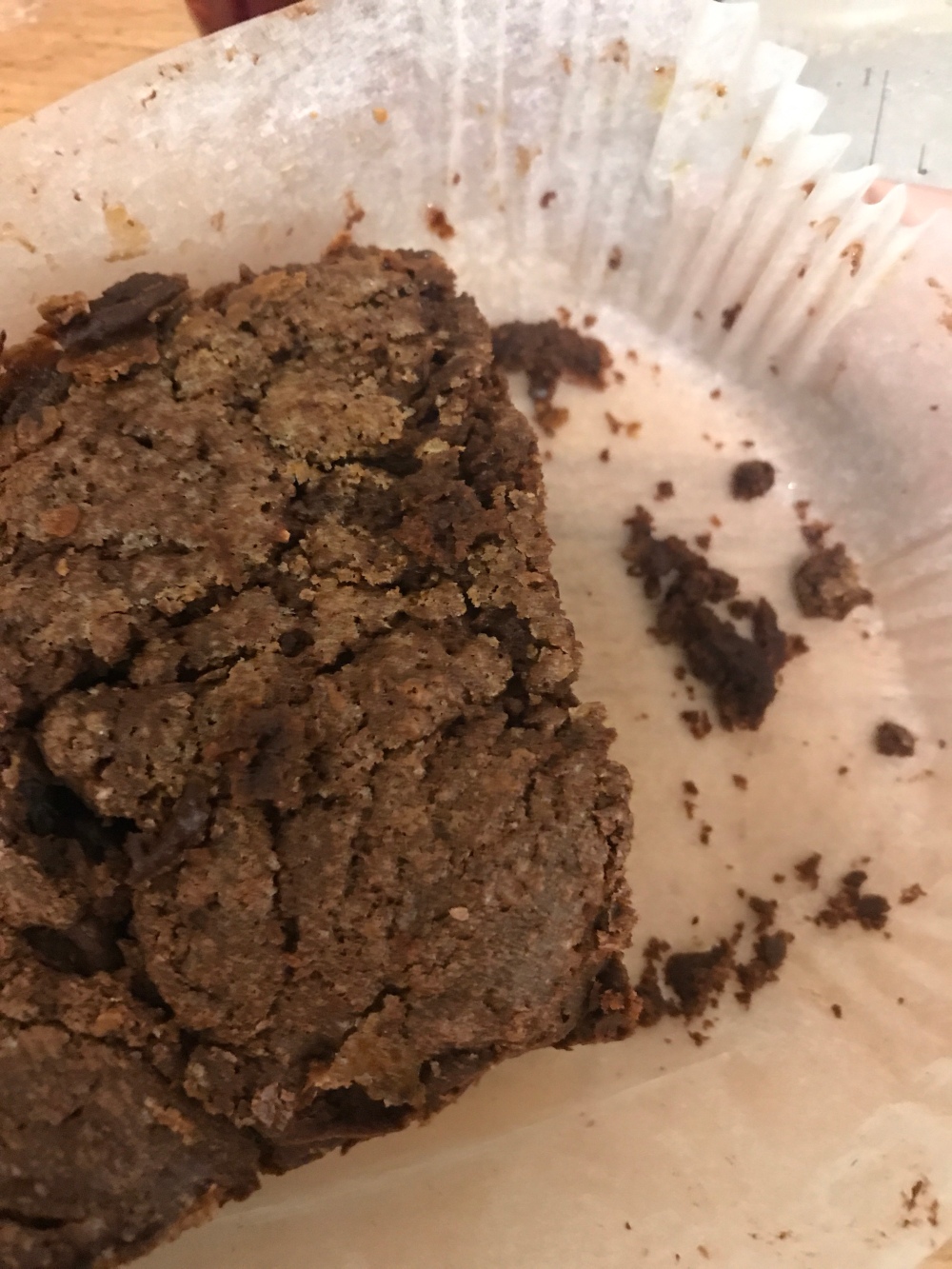 This is Chocolate Pound Cake from kitchn, another soy free chocolate fix (the recipe just uses cacao powder). It was okay, I’m not a massive fan of pound cake, I think that it can be too dense but this was certainly edible and nowhere near as horribly sweet as the last pound cake that I made.