I’ve very recently been put on the Low FODMAP diet by a dietician, it means missing out on quite a lot of foods, such a long list that if you go into a supermarket and look at pretty much any food label it feels like there’s probably something in there that you can’t eat. However thank goodness for cooking because if you cook from scratch, there’s a lot of recipes where you can swap a banned ingredient with a low FODMAP alternative or just miss the ingredient altogether (8 weeks without onion 😱). It’s all well and good though, saying cook from scratch, you have to find the time to do it.

Hands up, I have a sweet tooth and a lot of sweet stuff is definitely not on the low FODMAP list but by making it yourself, you know what’s going in there and you can make some alterations. So, I know me, 8 weeks of no commercially bought chocolate, will have me climbing the wall, if I don’t up my baking game but there’s still the time issue. Step forward Mary Berry’s Fast Cakes, I’ve had this book for a while and I love how it lists how long a recipe takes, both hands on time and baking time. So I’ll be working through the book for the next two months, making some FODMAP adaptations. 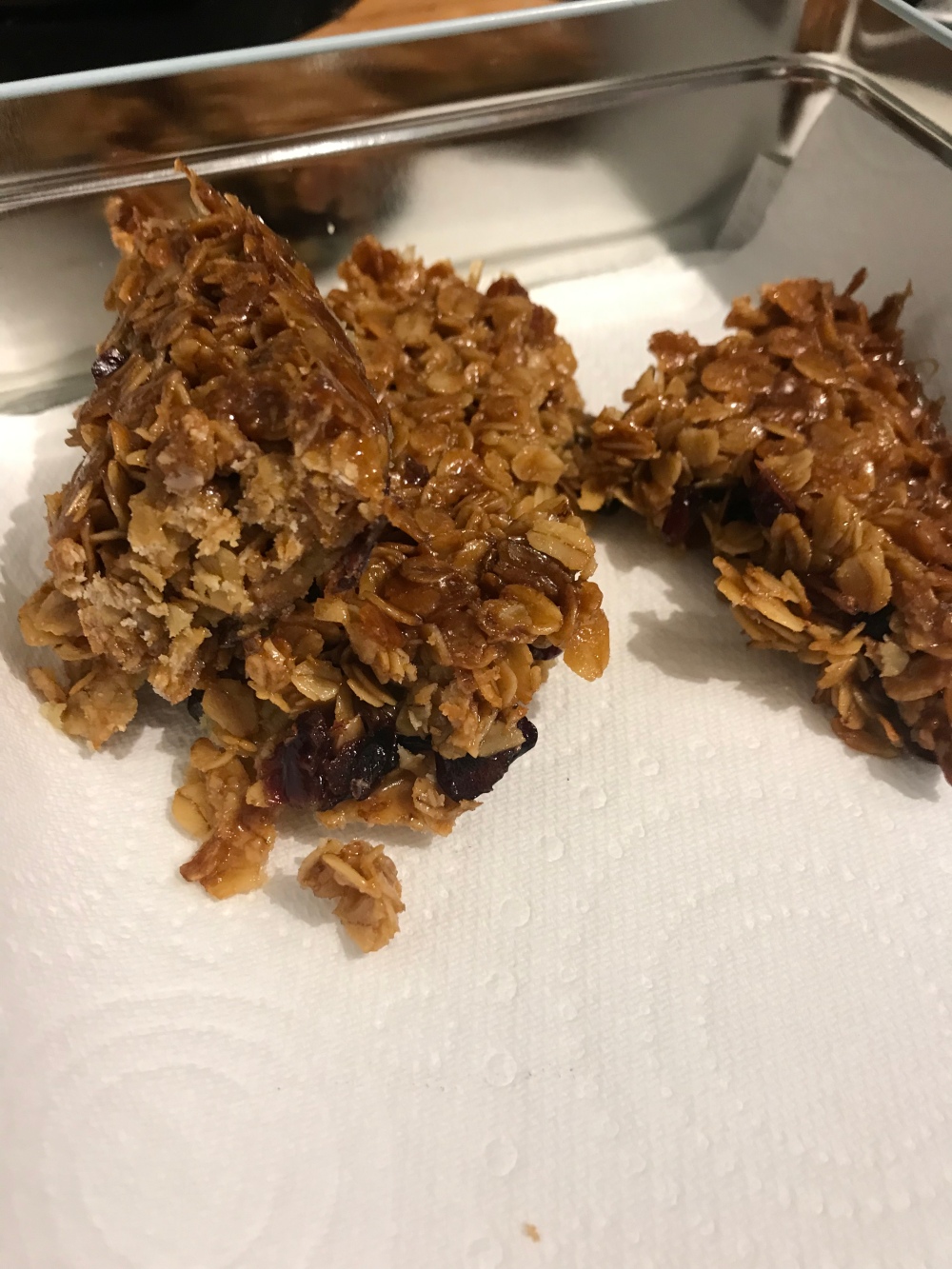 First up was Sultana Flapjacks, sultanas are a FODMAP no no but within limits dried cranberries are okay, so I used those instead. The recipe was quick to make (I made it in my lunch break, me baking in my lunch break is pretty much unheard of) and oh my goodness those flapjacks are evilly good. These are no snacks masquerading as health food. These flapjacks are best friends with Mr Butter and Mrs (no fructose thank you) Sugar. The two combine to make a lovely, chewy toffee flavour. The cranberries are nice in them too and as someone who is not a massive fan of sultanas anyway, I think it’s a substitution I’ll stick with.

I’m pretty sure I’ve blogged about James Wong’s hot chocolate before, the recipe is in his How to Eat Better. I went through a phase of making it fairly frequently but it never quite made my regular repertoire of recipes. Being on low FODMAP, I thought I’d revisit, regular chocolate is banned due to the cows milk (you can have butter on the low FODMAP diet and hard cheese but no cows milk) but as long as you use a low FODMAP plant milk and a cocoa powder that doesn’t have any added milk, you’re fine.

Now, I’ve tried plant milk before and very definitely not liked it but I thought I’d give it another go (out of necessity) and doing some research, I liked the idea of hazelnut milk. I’ll also say that having walked past Innocent’s display of plant milks in supermarkets for the last few months, they’ve actually managed to make plant milk look sort of tempting. Anyway, my research suggested that hazelnut milk had a thicker texture than almond milk and as it was the texture as well as the chemically taste that put me off plant milk last time, I thought that hazelnut milk would be the best one to try (also I liked how Innocent’s plant milks only have a few ingredients, so would hopefully be less ‘chemically’ tasting – this isn’t an ad or anything). Now I don’t actually like hazelnuts but I thought I’d risk it.

So it was with some trepidation that I gave the recipe a try with the hazelnut milk and …….. it was really nice! Nicer actually than with cows milk! The reviews I read about hazelnut milk being thicker were definitely correct, it was so thick and creamy. You can taste the hazelnuts but with the chocolate it reminded me of the Swiss chocolate that you can get in M&S, so it was okay and with the mixed spice and vanilla, also in the recipe, I think it will be a good route into me just generally liking the milk. 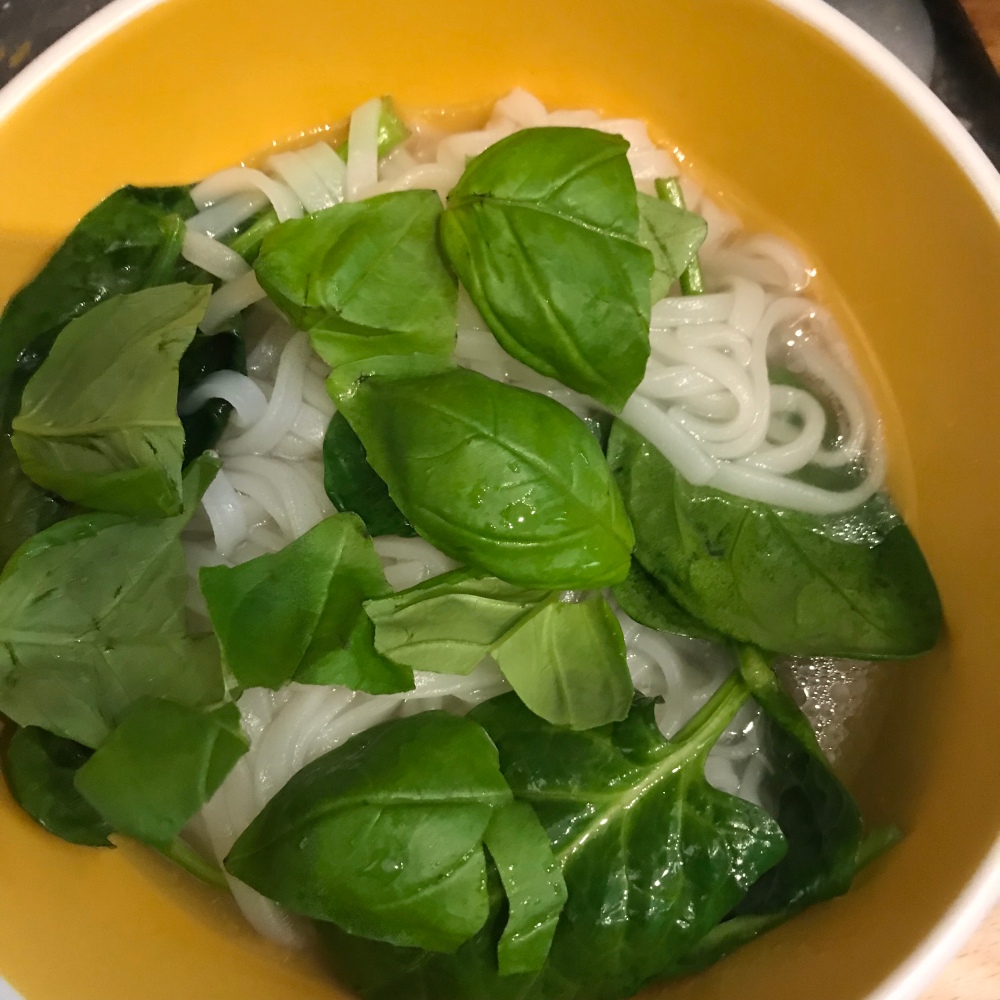 Hands up, yes I’m a hypocrite, if I get all squeamish about making chicken broth from scratch with chicken wings but have no issue using one of those little chicken stock pot things (which I currently can’t eat), I am definitely a hypocrite.

This is chicken broth noodle soup from Nigel Slater’s Kitchen Diaries II, I didn’t have to make any alterations to the recipe, it was perfectly FODMAP friendly but sorry Nigel, even you can’t make me enjoy rice noodles, ugh the texture is not good. Also, the chicken broth, which could have theoretically rescued the rice noodles, was so not actually worth the bother. It tasted faintly chicken-y and faintly gingery – star anise-y (because that was what was in it) but other than that, ugh this recipe was crying out for something else. Soy sauce would have rescued it a bit but that’s definitely off the menu (I knew pre-FODMAP that I have a legume intolerance). I ended up putting chilli flakes on it, which enticed me to eat half a bowl before I gave up because Waitrose wholemeal spelt sourdough toast was sounding distinctly more appealing (and trust me, that isn’t either).