I think that I went too off piste with this one, Quinoa, Tomatoes and Courgettes from Hugh Fearnley-Whittingstall’s More Veg, it’s meant to have raw baby courgettes in, which I couldn’t find, so I substituted with fried quartered and sliced courgettes and as I was frying I thought that I might as well add some pancetta too and then I ate the whole thing warm, so it wasn’t really what Hugh F-W was intending and the result was, well, it was edible, just nothing to shout from the rooftops. The tomatoes were relatively nice though, I’m trying to train myself to eat raw tomato and I’ve been discovering lately that raw tomato, as long as it’s briefly marinated in something, is rather nice, as it is here (cumin, lime, chilli, salt, pepper and sugar, although the nicest tomato marinade as far as I’m concerned at the moment is still smoked paprika and sea salt).

I woke up craving cheese and potato pie, my mum used to make it sometimes when I was a kid and, well, it was Smash (a brand of packet mash you add water to, for those who don’t know) and grated cheese, all mixed up and stuck under the grill (my mum embraced the packet food revolution with vigour). I have to admit, I’ve made Smash cheese and potato pie more than a few times when I was a student too but I couldn’t bring myself to do it now (although I’ll readily admit, when I’ve had TMJ in the past and couldn’t chew anything, I’ve lived off microwave mashed potato and melted cheese, so it’s not that much better).

Anyway, if you stick cheese and potato pie into Pinterest, you get a wide variety of options but I thought I’d go for the one that looked the closest (in appearance anyway) to my mum’s old dish, Mashed Potato Pie with Bacon, Leeks and Cheese from Delicious magazine. It obviously took a lot longer to make than sticking the kettle on and getting your packet of Smash out but it wasn’t too taxing and the effort is definitely worth it because it was rather nice, definitely ticking the warm, savoury carb boxes. 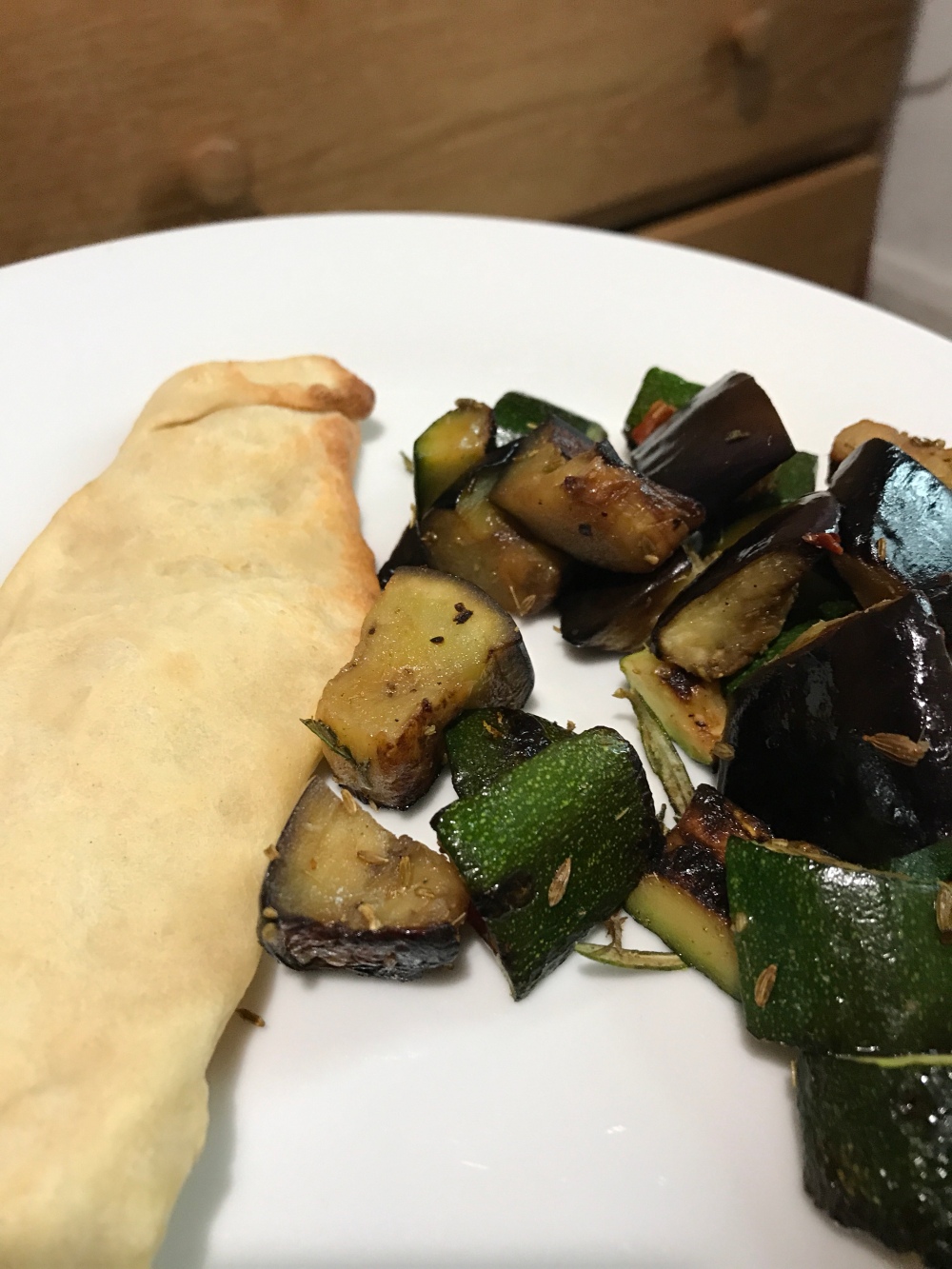 The pita bread is from James Morton’s Brilliant Bread and although it’s not anywhere near the standardised stuff you get down the shops, is absolutely delicious and really easy to make.

The aubergine and courgette is officially Aubergine and Courgette with Rosemary and Fennel Seeds from the tapas section in More Veg and that was rather nice too.