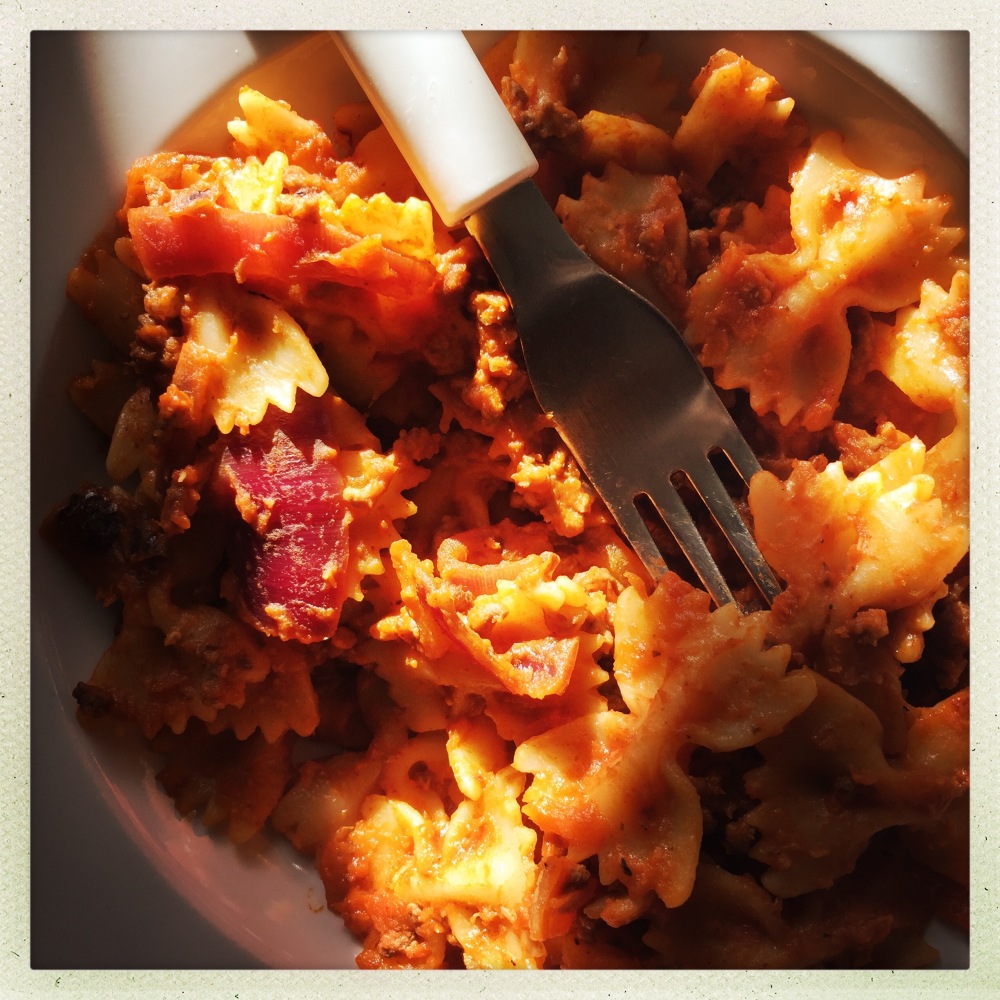 I am always open to new suggestions with my cooking, which is perhaps not always a good thing because when you’ve got a particular recipe down to a tee, why deviate into something that is probably not going to be that good? Such was the case with ‘My Ma’s Spaghetti Bolognese’ from Thomasina Miers’ Home Cook (I think I’ve reached my limit on how often I can look at that book in Google Books but google it and you’ll find the recipe). The recipe looked interesting because it had lentils as well as beef (and I like lentil bolognese) and it had an interesting number of flavourings chucked into the sauce, particularly barbeque sauce, so I was curious. The result though, well, first up, the addition of lentils made the beef and lentil combo turn into some sort of homogenous smear of ingredients, it certainly didn’t have the texture of normal bolognese, I’m all for the addition of lentils in things and although I could taste it, nobody else in the family commented on it, but, well, I guess if you want lentil bolognese, have lentil bolognese, a good lentil bolognese is delicious, trying to combine the two though, well it loses something and it makes the texture weird. As for the barbeque sauce, well, it just didn’t taste like bolognese, I had had high hopes that barbeque sauce would turn into some sort of amazing secret ingredient which would have everyone from now until my dotage go “Jo, what makes your bolognese so wonderful!?” but no, it just gave it a relatively nice hint of spice but also an off-putting taste of vinegar. My fussy son though ate it, probably aided by the fact that I’d told him in advance that there was barbeque sauce in it, so it has that going for it. 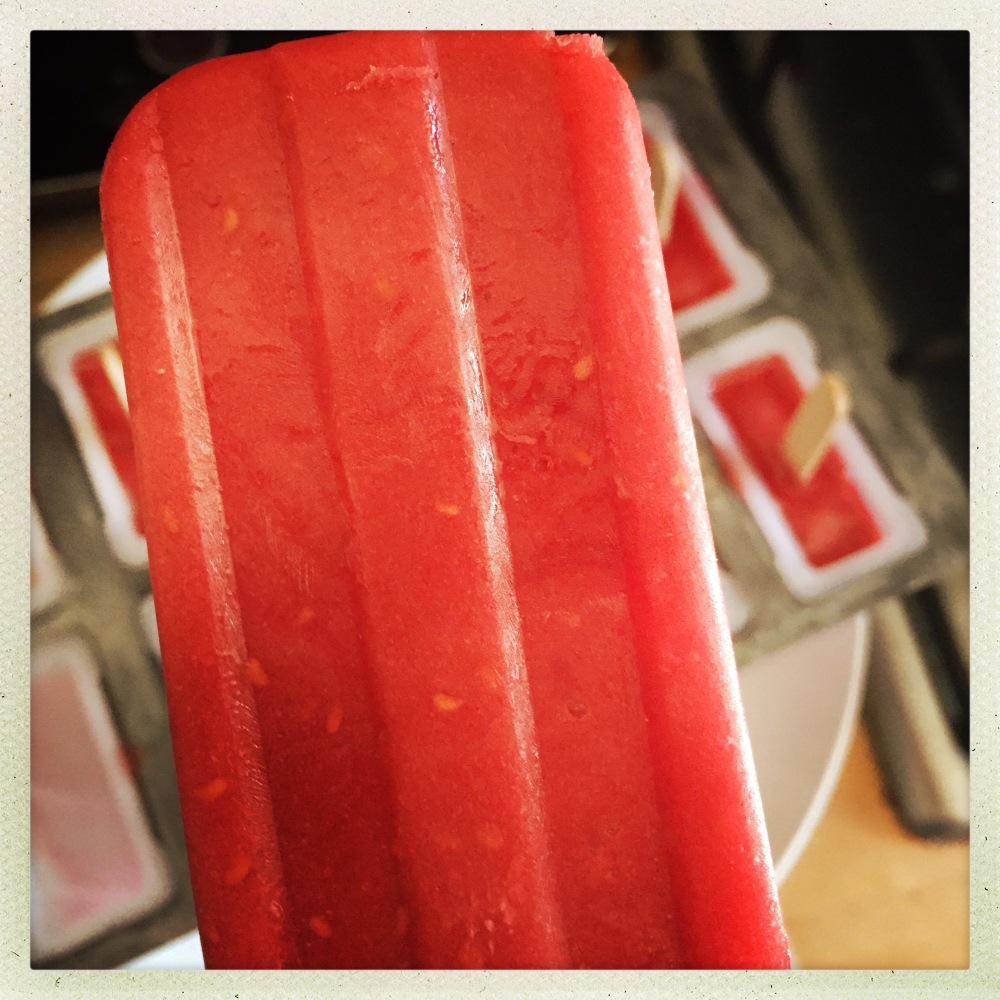 It’s ice lolly season from about April to October in our house, which is all well and good when our favourite brand of ice lolly (Del Monte’s Smoothie ice lollies) is on special offer but not when it’s not, it gets expensive. So I thought I would dust down my ice lolly moulds and make some of my own. This recipe is raspberry and basil and is from the People’s Pops book (there’s an adapted version here). Raspberries are still quite expensive in the supermarket, particularly in the amount you need for this recipe but I made a detour to my local market instead and found much cheaper raspberries, so I reckon these are definitely under 40p a lolly, whereas the Del Monte ones are about 86p each (although in fairness to Del Monte, their’s are bigger). These are rather nice too and only 70 calories a serving (although in fairness to Del Monte again, their’s aren’t that much more). Can I get through the rest of the summer just making homemade ice lollies and not buying them?

The wonderful Cookbook A Month are doing the New York Times Cooking app at the moment and as soon as I read about that, I was off to download it myself. This smoothie is the first thing I’ve made from it but the whole app looks amazing, a massive amount of recipes and all free! This one is the Pineapple and Mint Smoothie and it’s okay, it’s not the most visually appealing smoothie in the world and yes, it really does need ice cubes, I think (they’re in the recipe but I didn’t use them) but it was nice enough! I have to admit that the highlight was probably getting to use the mint from my garden, there’s always a pleasure to be had from harvesting your own food, even if it’s just a few herbs.

I have been known to partake in the odd energy ball after a workout, I try not to, they’re blinking expensive but refuelling properly after exercise is also important, so I had a go at making my own. These are from a recipe by Texan Erin, Chocolate Peanut Butter Protein Balls. I totally misjudged my sizes when rolling these up into balls, as the recipe is meant to make 20, I managed to make 9, oops, but they’re the sort of size of the protein balls I’ve eaten before and I suspect if I had made them half the size, I would have just eaten two at a time instead! Even with the chocolate, these are very peanut buttery, which is great if you love peanut butter, not so great if you don’t. I’m leaning towards the don’t side of the peanut butter camp but as I’m such a rubbish carnivore, I need to eat more nuts and I’m learning to like them. According to Lifesum, when you manage to make just 9 balls out of this mixture, each ball contains 9g protein and 14g of carbs, they are quite rich, they’re 248 calories, I’ve known chocolate bars that are less but these are a lot better for you and pretty filling too. PS if you try this recipe, don’t add the water until very last thing, as you may not need it, the brand of peanut butter I used was quite runny, so the mixture was already quite soft. 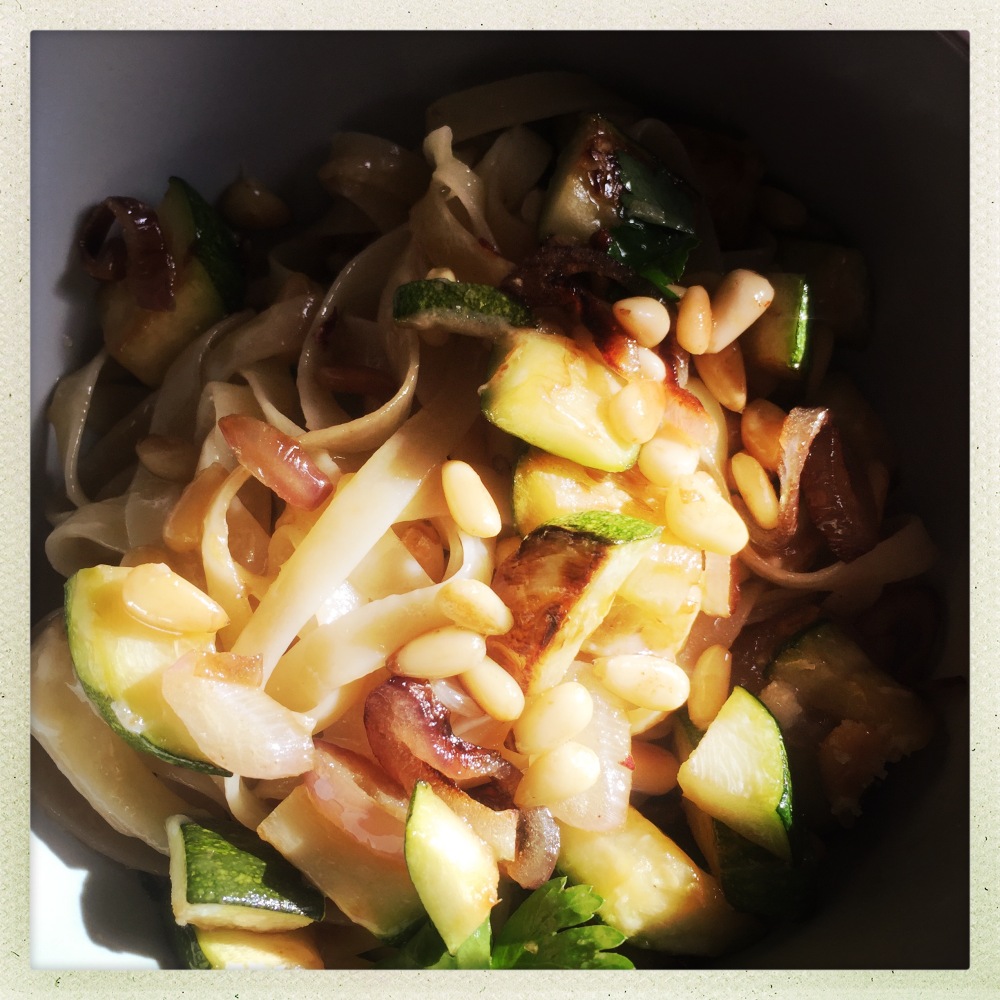 And another recipe from the New York Times cooking app, Fettuccine With Zucchini and it was absolutely gorgeous, a real pleasure to cook too (which is always a bonus). I made this just for me (which was also a ‘guilty’ pleasure, if I’m cooking dinner, I try to cook the same thing for everyone normally but that always means I’m cooking for the fussiest person), so I had to fiddle with the amounts a bit and that affected the cooking times, making it a lot quicker to cook than the recipe suggests but ooh it was nice!