I continued on with the Capital Ring on Sunday, starting roughly midway through section 14, at West Ham and continuing on the end of section 15 at Woolwich. The second half of section 14 was pretty much more of the same, as in the first half, basically walking along The Greenway, although at least this bit was quite a bit more actually green and a bit less smelly (The Greenway is on top of a sewage pipe). It wasn’t a particularly inspiring section and the photo above is the only one I took of this bit. The section does end in Beckton District Park, which was nice enough but it didn’t have any of the wow factor of some of the other sections. So, this bit of the walk was very much about the exercise and getting from A to B (and it wasn’t even as if getting from A to B was hard, the route is flat and very easy to navigate, so not much challenge).

Section 15 wasn’t particularly exciting to start off with either but it did pick up when the route went through the UEL campus, which has a stunning view of City Airport, across Royal Albert Dock.

Not that I’m a massive transport geek or anything (no, that’s my dad) but it’s not every day you see planes take off and land, it somehow seems very impressive, especially considering it’s in the middle of a city.

Once out of UEL campus, all my tricky navigating desires came true, as the route takes you through a bit of London which is still part building site but you get to the river eventually. 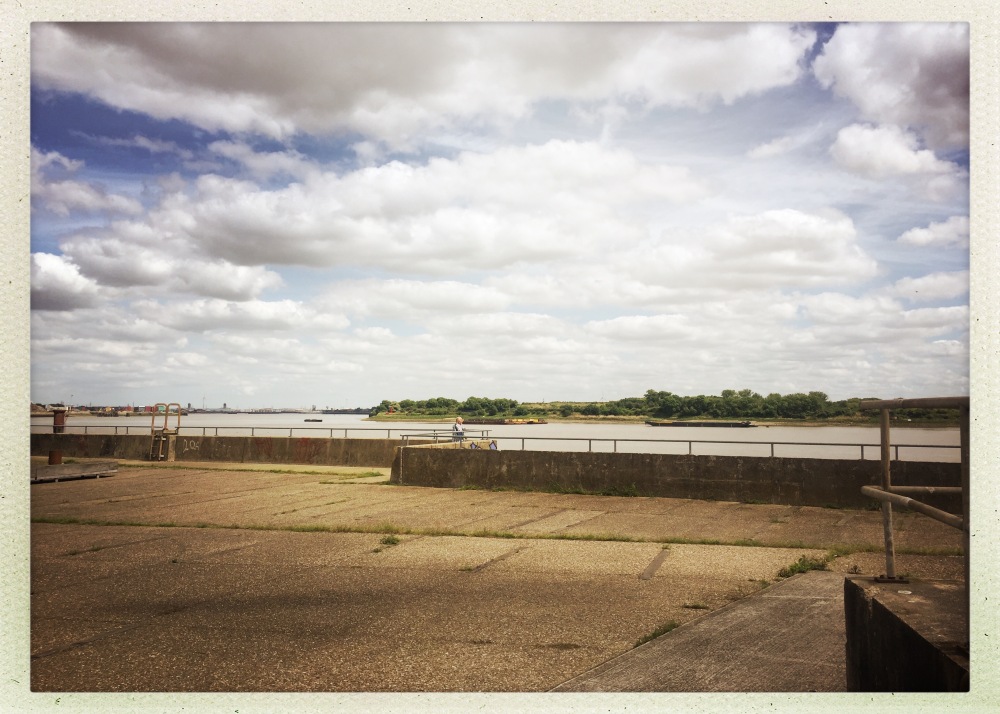 Section 15 is a bit of a momentous section for me, I think it’s probably a momentous section for a lot of people doing the Capital Ring because if they’ve started at the beginning, on section 1, section 15 is the last section, so it’s completing the circle. I started on section 7, as that’s nearest to where I live but that section happens to be the second place where you cross the Thames, so it felt really good to have at least completed the Capital Ring from one side of London to the other and it is always fascinating to see how much the river changes from one part of the capital to another. In Richmond, where the Capital Ring crosses the Thames, the river is on the smallish side but look at it here in Woolwich!

And there is so much sky, I know that, well, there’s the same amount of sky over Richmond as there is over the river at Woolwich but it just seems so big!

The route takes you along the river and over a couple of lock gates, it was tricky to navigate at times, as there were places where there were barriers up and there were so many twists and turns and as usual, the Capital Ring isn’t that well signposted, it is a bit “Umm, am I meant to go this way?”. It’s also, in parts, on this bit, particularly for a lone female walker, a bit creepy. There are sections of the path, where you have the river on one side and a fence with a building site / derelict ground on the other and you sort of get the impression that the only people who are going to be using the path are either people doing the Capital Ring or Thames Path, i.e. it’s not busy and it’s a bit isolated. I walked the particularly creepy bits quite quickly, so no photos (wasn’t that photogenic anyway), the photos below are from bit of the path that felt safer. 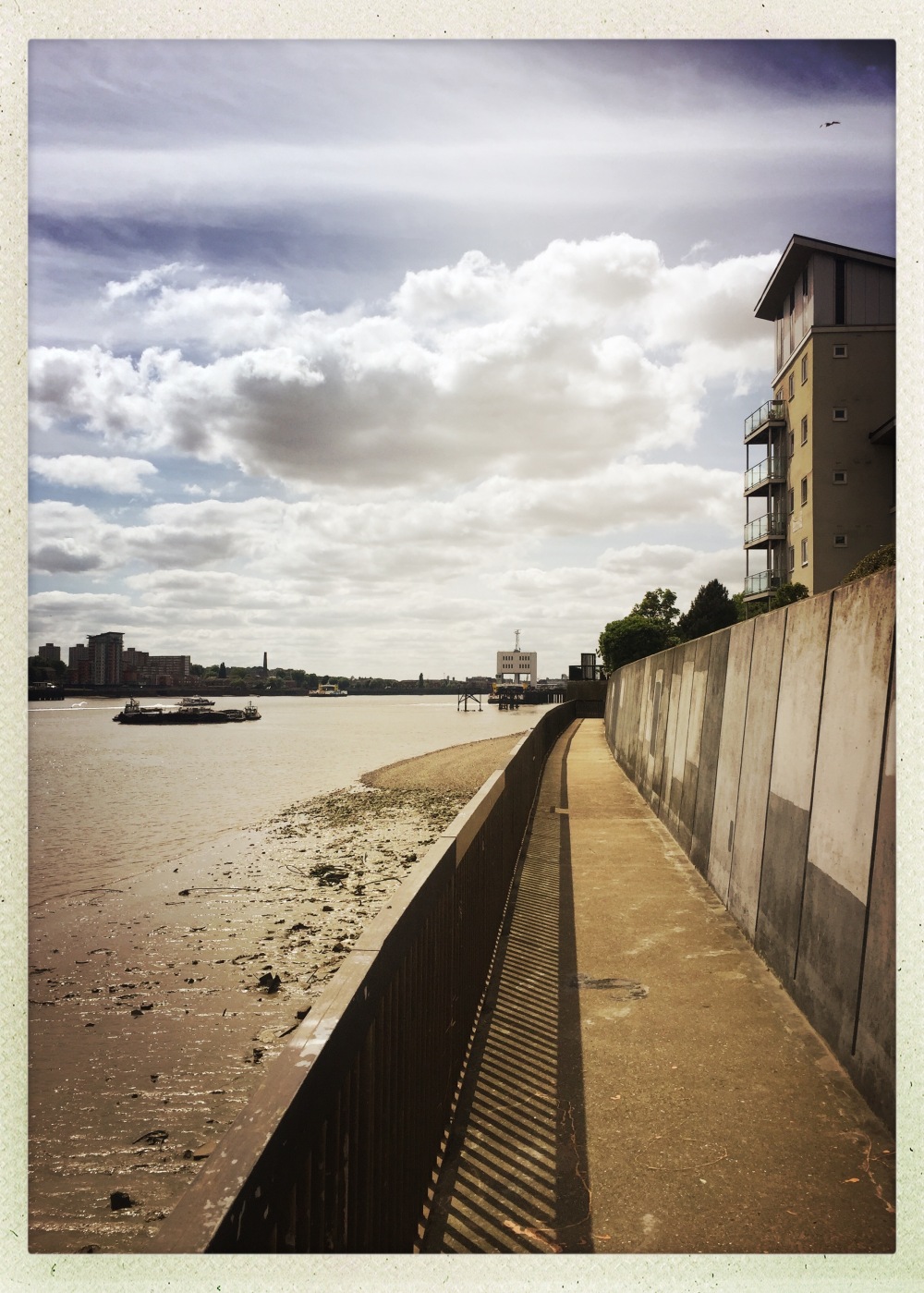 The path ends at the Woolwich Foot Tunnel (you go through the tunnel to the south side). That bit was fun (and not as creepy as it looks, there were people around)! 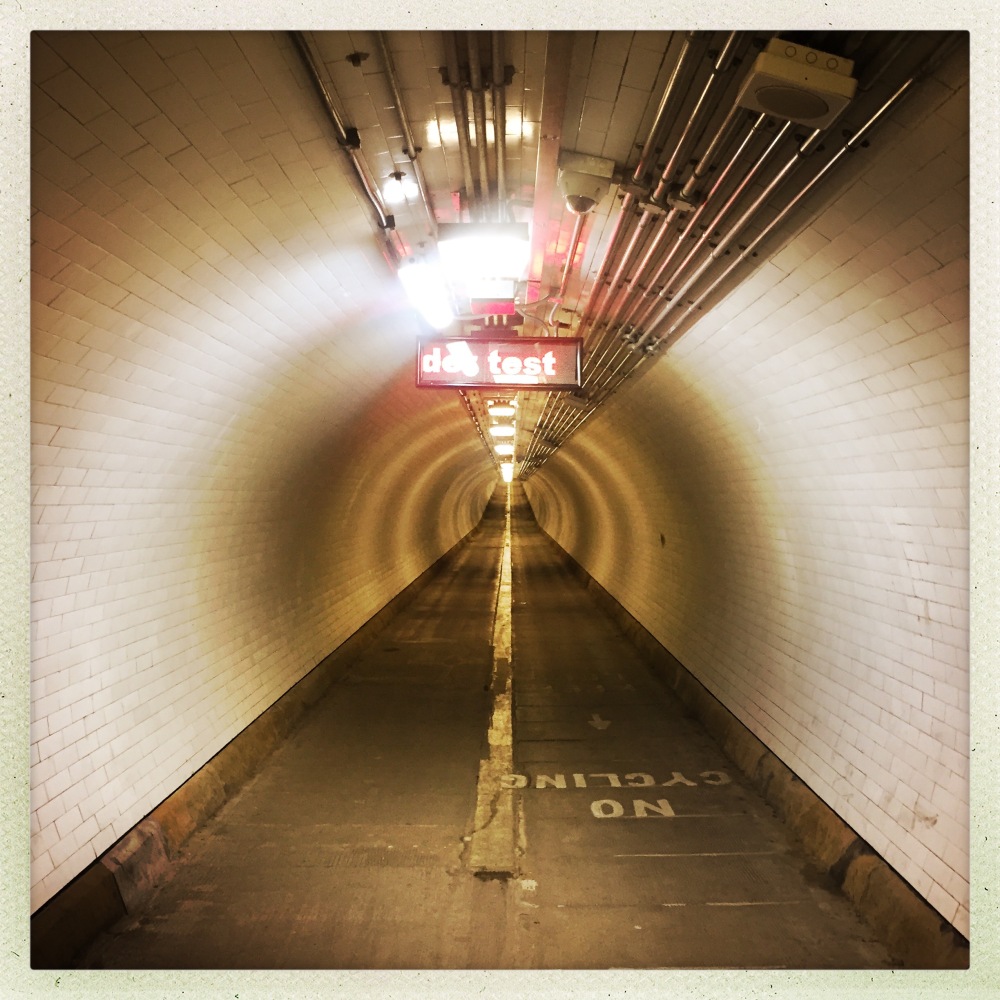 So, as I started on section 7, I have sections 1 to 6 to go, South London basically. I am looking forward to getting closer to section 7 again, as it means I won’t be literally traipsing across the whole of London just to go for a walk and less time to get to and from the route will eventually mean that I’ll have more flexibility about when I can do those stages. I’ve looked at my schedule though, six more sections doesn’t seem like that much (although some of them are pretty long) but I don’t think I’ll be completing the Capital Ring this year, I started section 7 in February 2016, my walking got seriously interrupted by some surgery in June that year and by the time I was recovered enough to do long distances again, it was winter and some of those Capital Ring creepy bits are even creepier in the middle of winter, so I couldn’t continue then (although I did do one section just after Christmas, when I knew that there would be lots of Christmas walkers around). I think I could do six sections by this Autumn but unfortunately I have more surgery this summer, which will hamper my walking yet again, so, I think I have time for maybe one or two more sections this year and then that may be it until next year.