I’ve been craving chicken tikka masala for a while now, which is a bit odd, as I’m not that much of a curry person but there you go (and chicken tikka masala isn’t really that much of a curry anyway). So I was pleased to find a recipe for the dish in ‘One Pound Meals’. However, on making it, I think what I’m really craving is the precise ready meal chicken tikka masala I used to have as a treat when I was a teenager and although this was nice (and probably way better than a ready meal, cost and health-wise), it didn’t really tick any of the craving boxes. I think though, if I somehow managed to find that precise ready meal (it was a Tesco one, early 90s), I probably actually wouldn’t like it anywhere near as much now, I’m more craving a taste memory rather than the actual thing, as since learning to cook, ready meals have lost all their attraction for me and more recently, due to a thing I’m not going to go into here, I even more dubious of foods which have been mass put together in a factory somewhere.

But, as for the actual ‘One Pound Meals’ chicken tikka masala, it was okay, it suffered a little in a way that the lasagne I made last week from the same book suffered, in that although ‘One Pound Meals’ is great in that the dishes are cheap and quite quick and easy to make and some of the recipes I’ve tried so far taste so amazing they taste like they cost 10x as much and have been lovingly slaved over for hours, other dishes, well, you can taste that they’ve been ‘skimped’ on and this is one of them. There was way more sauce than chicken and it was, a bit, bland but for something that cost £1.51, I can’t really complain and, as this whole thing is about me not eating sandwiches or pasta for lunch, it was definitely better than that!

In the morning I made Gingerbread Loaf from ‘Tanya Bakes’, it was okay but I think I generally tend to like my gingerbread a bit darker, denser and spicier. 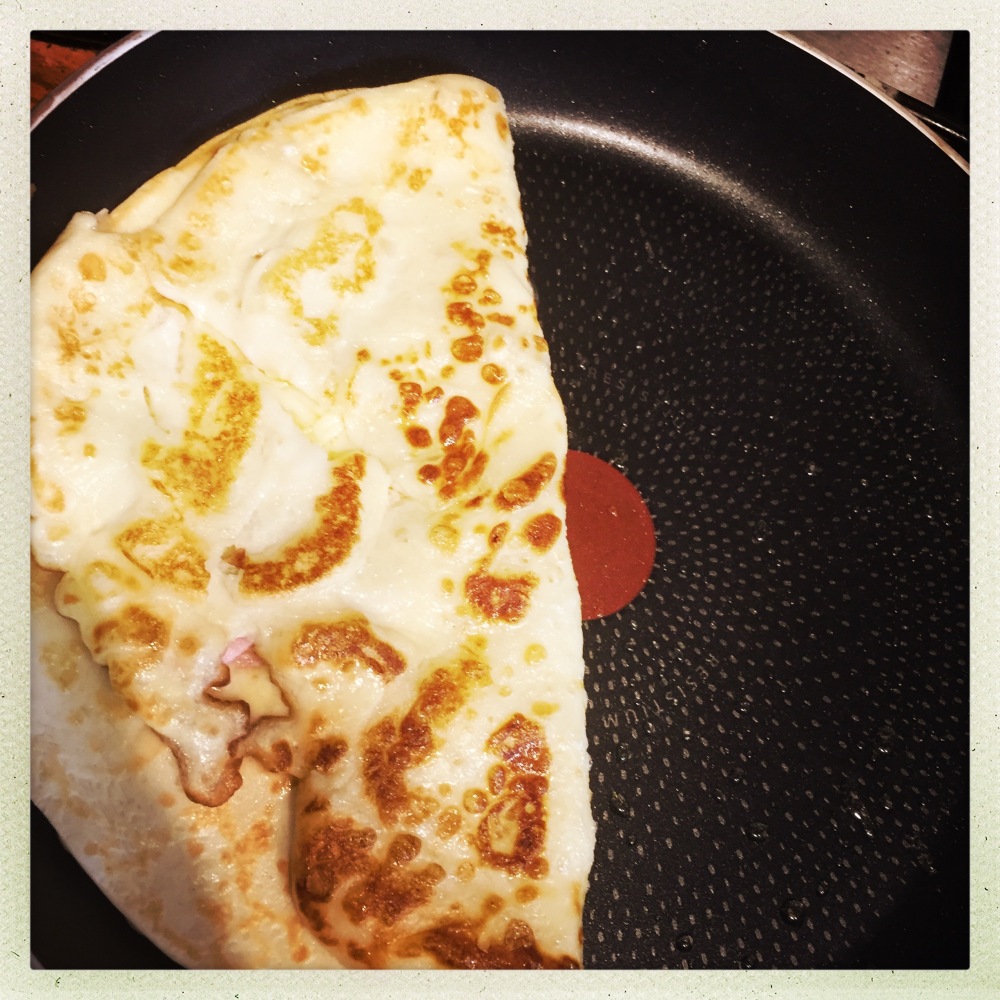 For lunch I made us all ham and cheese crepes from ‘One Pound Meals’, these were also okay but nothing particular to gush over. They reminded me, just prior to pancake day, that I really am bad at making pancakes, also, I think, one of the joys of pancakes, savoury or sweet, is when you get someone else to make them for you. These came to £1.17 a portion, ooh, so close to a pound.

This doesn’t look much but it was actually rather nice, from the ‘One Pound Meals’ book, this was actually, amazingly 48p, it’s just roasted butternut squash squished down in a frying pan with some olive oil as you cook your pasta and then mixed together. As I was cooking it, I was not convinced and I never did get the butternut to glossily coat the pasta as it did in the photo in the book and I thought it would be rather bland but nope, it was lovely. Although I’m not normally one of those people who is particularly fussy about which pasta shape goes with which sauce, I have a feeling that this one would only work properly with tagliatelle because if you went for a shorter shape, like penne for example, some of your mouthfuls of pasta would have no butternut squash at all and now that would be bland. Lovely as this dish was and so, so cheap (for the record I used frozen butternut squash from Waitrose and tagliatelle from Co-op for this), I think there are so many things you could add to this to make it even nicer, okay it would add to the cost but rosemary would be nice (and that wouldn’t add to the cost for me, as I grow it in my garden) or rosemary and pancetta, ooh I could just imagine it, the rosemary would be added to the butternut squash as it roasted, the pancetta cooked with the squished squash, the butternut absorbing the pancetta juices, I so have to make that. You could also add some garlic to this and maybe some parmesan too.

Z is fascinated by the number of followers I have on my Pinterest account, it had been getting near to 10k for a while and he was insistent that when it did, we would have to have cake. Me, personally, I am not that obsessed with my follower figures but I did notice on Monday morning that I had 9999 followers, so I mentioned that to Z and he spent the rest of the morning keeping an eye on my account waiting for it to turn over to 10k (whether this was due to his pride at my Pinning prowess or the desire for cake, you decide). He informed me when my follower count dropped to 9998 and then an hour or two later rushed in brandishing his iPad, 10,000, so I had to make cake.

As this was a ‘special occasion’, I thought I’d push the boat out and make an iced cake, as you may have noticed from this blog, although I do like baking, I don’t tend to make iced stuff because I’m rather rubbish at it (and also because I tend to think icing just leads to unnecessary calories). The cake is from ‘Tanya Bakes’ and it’s called Sunday Cake because apparently Tanya’s mum always makes it on Sundays. It’s a chocolate sandwich with chocolate buttercream filling and (and this is the genius bit) just a big block of melted milk chocolate as the icing on top. As you may be able to tell from the (bad) photo, the cake is a bit slanty, as it didn’t rise properly on one side, so the smartie decorations were trying to slide off but considering some of my previous icing disasters, this isn’t that bad. As for the taste, it’s okay, it’s not the most chocolatey of chocolate cakes but sometimes that can be a good thing.